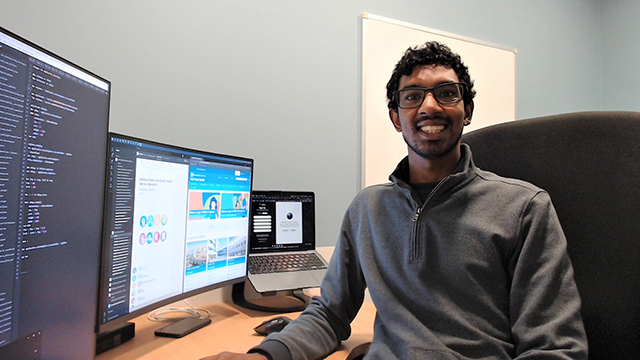 Hari Muralidharan has a noble vision. He is working to establish a hospital and health service serving the residents of Pacific Island nations that will provide them with blockchain tools of open healthcare and banking to help them rise above the hardships they face. To realise this ambition, he has launched another project doing good, an Australian AUSTRAC registered non-custodial digital currency exchange ethrift.io which allows everyday Australians to get started using the blockchain.

Hari was born in New Zealand. His father was from India and his mother from Fiji. Both are doctors and they divorced when he was young, so he grew up all over Australia as his mother provided service to regional areas as a Doctor. Now 31, he has followed in his parents’ footsteps and now works in health care, in clinical governance at Gold Coast University Hospital. Hari has already founded a medical practice in Queensland and he worked there for five years after university before selling it to transition into Public Sector Healthcare. His partner in the cryptocurrency undertaking is David Chung. They have been friends since high school and went to law and business school together, David going on to practise law and Hari, healthcare. David co-founded a health-tech start-up in 2016, which is now one of the largest telehealth solutions in Australia for psychology services and continues to operate his own law firm specialising in supporting blockchain startups in Brisbane. They have a third partner Andrew Bish heading up the Thailand team in Bangkok and preparing for rapid growth.

The motivation behind Hari’s vision is the accomplishments of his grandfather, who died in 2020. He says, “This is the greatest man I have known, simple, diligent and hardworking. He loved God and gave so much for many people. He worked the fields in Fiji as a sugar cane farmer and raised my mother to be doctor thus giving her and me a life that he could never have hoped for. He was successful through ingenuity and community. Forming a syndicate of farmers, he was able to improve the circumstances of an entire community and they faced many hardships, together. This is something that I have only ever dreamed and so now I seek to perpetuate my grandfather’s vision in his home country for this generation and the next.”

Funding the vision through a cryptocurrency venture came from his own experience with the currency. By studying it deeply, he has come to understand its advantages as well as its challenges. Hari’s version of cryptocurrency avoids those challenges. It’s a simple, friendly and safe portal anyone can use. It uses non-custodial methods, meaning ethrift.io doesn’t hold deposits of any kind. “It’s basically a hands-off deal,” Hari explains. “The person uses their own Australian dollars for the transaction and they own their cryptocurrency as a result, held in wallets only they control.”

With so many people living off their credit cards, Hari adds, cryptocurrency can also be used to manage debt in the future. “What we would suggest for people is instead of having a credit card, lock up some money and then they borrow against it. DeFi instruments can be a much more cost effective and efficient method of managing debt, saving hundreds or even thousands in interest. In the near future we will be releasing a system that will assist customers in migrating their unsecured loans into low-interest collateralized DeFi services.”

Hari also plans to build a blockchain access system that will empower people to own, understand and contribute to their health data. It will provide a unified source of information for healthcare services, too, so that they can make confident and accurate clinical decisions, creating better health outcomes for users.

Wobot.ai, the AI-powered Video Analytics Platform, Announces the Launch of a New SaaS-based and Simplified Version of its Product