Kaspersky recently revealed in a virtual conference that 2020’s cybersecurity “disease” is targeted ransomware. Also dubbed as “Ransomware 2.0”, this type of attack goes beyond kidnapping a company’s or an organization’s data. These groups are now utilizing the increasingly valued digital reputation to force their preys to pay hefty ransom.

Vitaly Kamluk, Director of Global Research and Analysis Team (GReAT) for APAC at Kaspersky, revealed that at least 61 entities from the region were breached by a targeted ransomware group in 2020. Australia and India logged the highest number of incidents across APAC.

“Targeted ransomware has been a problem for many Asian enterprises. Over 61 companies were breached this way in Asia alone. In some cases, Maze ransomware gang claimed responsibility and published stolen data from the compromised companies,” said Kamluk.

Maze group stands out as the most active and the most damaging of all. Formed in summer 2019, it took them about half a year to prepare and launch full scale campaign against many businesses. The first victims appeared in November 2019, when they leaked 700MB of victim’s internal data online.

Many other cases followed and within a year Maze breached at least 334 companies and organizations. This is one of the first groups which started the use of “pressure tactic”. This refers to cybercriminals threatening victims that they will publicly leak most sensitive data stolen from their compromised systems via the group’s own website.

“Pressure tactic is a serious threat to public and private organisations. This attack plays on companies’ digital reputation as it threatens to divulge data of a breached entity, compromising its security and its name at the same time,” he added.

Kamluk noted that digitalisation has birthed different pressure points for a company. Before, enterprises’ main concerns only included business continuity and, depending on the industry, government regulation. Now, surviving in the era of digital reputation economy means that they should also be aware of business trust – with their partners and customers – as well as public opinion. 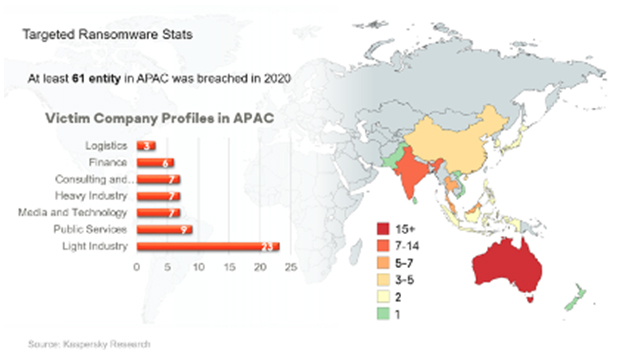 A recent survey conducted by Kaspersky proved Vitaly’s points. Results showed that 51% of users in APAC agree that a company’s online reputation is essential. Almost half (48%) also admitted that they avoid companies who were involved in a scandal or had received negative news coverage online.

“Maze group just announced that they are closing down, but this gang just triggered the beginning of this trend. A successful targeted ransomware attack is a PR crisis which can damage an organisation’s reputation, online and offline. Financial toll aside, fixing one’s name is quite a harder task to take which is why we urge public and private entities to take their security seriously,” adds Kamluk.

To remain protected against these threats, Kamluk suggests enterprises and organisations to: