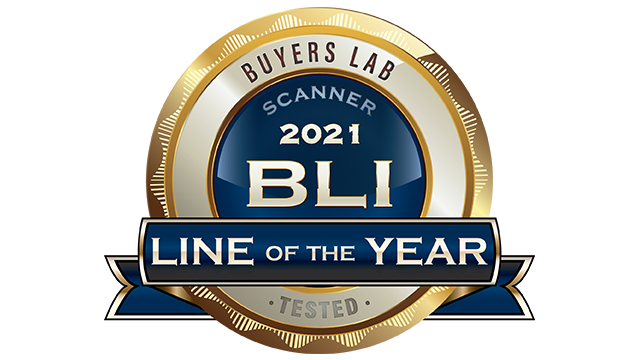 Keypoint Intelligence, the world’s leading independent evaluator of document imaging hardware, software, and services, today announced that Kodak Alaris has won BLI’s coveted 2021 Scanner Line of the Year Award. Given once a year, this award recognizes the vendor whose product line is deemed best overall based on its rigorous lab evaluations.

To determine the Scanner Line of the Year Award recipient, Keypoint Intelligence considers current scanners in the OEM’s portfolio that have been submitted for lab testing. To judge the overall quality of the line, analysts look at the overall rating a scanner received after testing as well as the ratings in key categories such as Reliability, Productivity, Media Handling, Image Quality, Ease of Setup, Drivers/Utilities, OCR Performance, and Value.

“From small desktop devices all the way up to high-volume production units, Kodak Alaris scanners provide businesses with everything they need to optimize processes where paper documents are fed into digital workflows or repositories,” said Lee Davis, Associate Director of Software/Scanners at Keypoint Intelligence. “Scanners from Kodak Alaris are highly reliable, can scan just about any document that you place in the feeder, and offer some of the best OCR and compression capabilities of all manufacturers we’ve tested. That, plus their outstanding lineup of workflow automation and distributed capture solutions, is why Kodak Alaris is taking home yet another Line of the Year Award from Keypoint Intelligence.”

“To win the Scanner Line of the Year Award five out of the last six years is a direct result of our ongoing commitment to invest in the Kodak Alaris portfolio,” said Don Lofstrom, President & General Manager, Alaris division of Kodak Alaris. “Our engineers and product development teams are the unsung heroes who keep Kodak Alaris ahead of the technology curve. With decades of image science expertise, innovation is in our DNA and a driving force behind our company’s success.”

Tech Mahindra Unveils TechMVerse to Drive Commerce in the Metaverse